This is George’s account of his recent trip on the yacht, Harmony.

“I had been asked to join the crew of Harmony, a Beneteau 50, to do a YM Prep for the owner, John Robinson.

John and his wife, Caroline, did their Day Skipper and Competent Crew course with us last year. This July John took a month off to bring Harmony from the UK to Kalamata in Greece where he and Caroline are building property.

“I joined Harmony in La Corona, northern Spain at midnight on Tuesday 10 July. Originally John had planned to leave the UK on 1 July but the start was delayed due to bad weather. This meant we had only a crew of four, rather than six as intended, as not everyone could make the changed dates. We decided to break into two watches, splitting the night hours into two six hour watches. This left very little time for instruction.

We sailed at 0900 next day after safety and equipment checks. I had forgotten the wave motion of the Atlantic was so different from the Mediterranean, with a long fetch rather than the short choppy seas I am used to nowadays. We started in rain but after 3 hours we had bright sunshine.

On reaching the NW corner of Spain under motor the wind picked up from the north. John had recently purchased an AR spinnaker. With the wind blowing 8-12 kts we decided to sail using the spinnaker only due to lack of experience of the crew.

With the sail up and a following wind and sea we cracked on at 8.5 kts. This lasted until 0100. At this time the wind and sea had increased so we decided to change sails to a reefed main and genoa. During the 2000 to 0200 watch I calculated that we had covered 107 NM in twelve hours.Inshore there was a lot of traffic, mainly small fishing boats and unlit fishing floats. We decided to sail offshore (60NM) to avoid this. John had rented a satphone which proved invaluable as he kept in touch with his wife, Caroline, in the UK. She then thoughtfully SMSed or emailed the crews’ family on our progress.

The second day the wind continued from the north and at daybreak the spinnaker was used again. At 0920 the yacht was fixed and found to have covered 212 NM in 24 hours at an amazing average speed of 8.83 kts, only the first 40 miles under motor. As we closed the Lisbon area we encounter a separation zone for large ships. There was also an inshore route for smaller vessels. We decided to head back toward the land. This led to a very busy few hours at night with sometimes over 20 vessels on the radar – mostly fishing boats.

The following morning it was cold and foggy with visibility down to less than 1000 yards. We also had up to 20kts of wind from the north. It stayed like this until after midday when the sun burned off the fog. 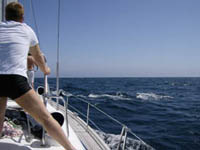 During this time we saw a pod of pilot whales and many dolphins. When we reached the SW corner of Portugal, Cape St Vincent was sighted. As we turned east the wind increased to 25-32kts. While reefing the sails we used the engine. Suddenly the engine stopped. We had been on the same broad reach for 30 hours and all of the fuel had drained into the tank that did not have an engine take-off pipe!

At this point we had two reefs in the foresail and one in the main and still had 45 miles to go to the nearest marina, Portomao. We hove-to to get some fuel into the empty tank. This proved a slow job as the pipe between the tanks was so small. As it was nearly sunset we decided to contunue under sail only to Portomao. We arrived outside the harbour at about 2300. John had managed to bleed the engine and get it started. Unable to raise the marina on VHF we did a night entry and secured on the empty refuelling pontoon. As we were unsure how much fuel we had managed to transfer there was a little tension entering harbour; we were hoping the engine would not splutter and die on us again. We had covered 460NM at an average speed of 8.6kts.

The next day John Marshall, one of the crew, flew back to the UK. We refuelled, cleaned and provisioned the yacht. Three new crew from the UK arrived early in the afternoon and we sailed at 1645. With six crew now onboard we went into three watches, red, white and blue.

Next morning found us 60 odd miles from Gibraltar straits. The wind began to build until we had over 30kts over the deck and on the nose. Added to that a 2kts flow from the Mediterranean to the Atlantic meant that we were making no headway. We decided to sail, well reefed, to Barbate, Spain, about 40 miles away.

We secured near the visitors berth and while John went to see the marina staff the crew cleaned up the boat. While working on deck two skippers from near-by yachts came over to ask about the weather outside – one had experienced over 40kts trying to sail into the Mediterranean. We decided to stay the night and enjoyed a hearty meal in the Marina restaurant.

Only one watch was required to sail the next morning so at 0530 we slipped. There was still a big sea but the wind had dropped to 6-8kts-still on the nose. We were pleased to see ‘the rock’ through the haze.

(Note from Melody – I think George is either giving an impromptu history lesson or telling stories about his Naval days!)We sailed past Gibraltar at midday, it was very busy with big tankers, warships and enormous container ships.

Once past Gibraltar we steered north-east to IbIza over 300 miles away. Many attempts were made to sail but the wind gods were not with us. We motor sailed all the way as three of the crew had flights to catch and we had new crew joining.

We sailed past Gibraltar at midday, it was very busy with big tankers, warships and enormous container ships. Once past Gibraltar we steered north-east to IbIza over 300 miles away.Many attempts were made to sail but the wind gods were not with us. We motor sailed all the way as three of the crew had flights to catch and we had new crew joining.

Outside Ibiza we had no luck contacting the marina on VHF so headed for the nearest refuelling jetty. Staff there told us there was no space in any of Ibiza’s marinas. Some yachts had anchored over 48 hours awaiting a berth.

Although the weather was warm and sunny with blue seas, we were all struck and disappointed by the amount of hotels and apartment blocks along the sea front.

We anchored off after refuelling, filling the fresh water tanks, and provisioning. We used the tender to go ashore for a meal. Three of the crew, including myself, left after the meal for hotels and early flights. John’s wife, Caroline, and Tom, Mark’s son, joined that night. One new crew member was not due to join until after 0200, when his flight was due. The new crew took the tender back and the yacht left at first light.

We had sailed over 1250nm. Interestingly, on the leg from Barbate, we averaged only 8.06kts mostly motor sailing. We had seen two pods of whales, two turtles, many dolphins, tuna and swordfish. John’s planning and execution of the trip were excellent and I had no hesitation in signing off his Coastal Skipper practical course completion. He now moves on to prepare for his Yachtmaster. Ted, Caroline’s father, completed a Competent Crew course while on board.

I had the pleasure of sailing a marvellous new 50ft yacht with a great mix of people. My thanks to John and Caroline, Rob, John Marshall, Ted, Mark and John Bainbridge.”

We’d love to get more pictures and tales from the rest of the crew.

The positive experience started with the travel arrangements, Melody helped us coordinate and guided us though not only the Greek language arrangements but the Czech side as well. The on-board instructor was OUTSTANDING, he stressed safety and fun, he kindled a love of sailing in my daughter and helped her earn her competent crew certificate and my 8 year old son was taught much more than I would have thought possible and he too now has a love of sailing and fascination with boats.

Instructor was very knowledgeable and good at showing what he means. He is very good at ensuring the students know what is expected. The sailing route was good so in addition to learning it was nice to see the harbours. Mix of people on board was great and good to learn with. Great overall.