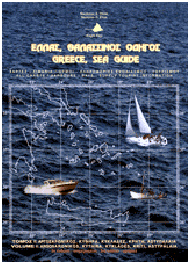 I was recently asked by a UK sailing magazine to write a review of the Greece Sea Guide by Nicholas Elias. One of their journalists sailed with us on a milebuilding trip last May and was introduced to the guide then.

You’ll find the review in the May edition of Sailing Today but I thought I’d also put something on the blog for those of you who plan to come cruising in Greece this year. It is a good alternative to Rod Heikell’s pilot book and contains many anchorages that you won’t find anywhere else. This makes it a perfect choice for those who like to get off the beaten track.

We use some of the less-known bays and ports as practice areas for navigation for our Day Skipper candidates.

Elias produces four volumes that between them cover all of the Greek mainland and the countries thousands of islands. The guides are very big and relatively expensive at 95€ each but they include not only the information you’d find in a pilot but all the charts you need to sail in that area. They are a complete chartwork and pilotage solution.

If you are coming on a one or two week charter or flotilla holiday it’s probably not worth while investing in the full guide. Elias also produces ‘pilot charts’ covering smaller areas. These have a waterproof chart on one side, and harbour plans and navigation information on the back. Each chart retails at 25€.

All Elias guides have some nice features which, as far as I am aware, are unique to his publications. In addition to the normal symbols found on nautical charts he shows areas where you will find strong surface currents (useful to know as in these non-tidal waters it is easy to assume that there is no influence other than wind) and places subject to big waves.

One symbol that I particularly like is the small compass coloured red or white that indicates the direction of shelter and exposure in harbours and anchorages. It makes it much easier to assess the suitability of an unfamiliar destination before you arrive there.

You can see an example of the use of this symbol in the image above. You’ll notice that the charts and guides are in two languages – Greek and English. This makes them look a little confusing when you first start using them but you will very quickly find that you filter out whichever language you do not use.

As you can also see above with PE103, he includes useful waypoints. We’ve used many of these and they really are in the places you would want them! Each has a unique name consisting of both letters and numbers to make them easy to identify. You can enter the name into your GPS immediately.

One of the only weaknesses I find with Heikell’s pilot is that he re-uses waypoint numbers in each chapter. I used to add the chapter number in front of them to identify them. It is not necessary to change Elias’s names in any way.

You can find out more about the publications and order through the Internet at http://www.eagleray.gr

Another fantastic week of training , both in class and practical instruction. Again , my instructors’ concise method of training allowed me to maximise the time spent learning and gaining positive experience. Social and training techniques are excellent. I shall return soon. Thank you!

Our week as RYA Competent Crew trainees was overall above expectations. We came in with no sailing experience and now after only a week feel like we have learned a huge amount of new skills and are ready to continue our sailing adventures. Alex was excellent. We couldn’t have asked for a better instructor.