During the week 16 September we augmented our normal fleet (well, fleet is a bit grand but it sounds good ..) with Papazafs, a Dufour Atoll. As we celebrated International Talk Like a Pirate Day during that week the crew planned to return to Aegina dressed as pirates and flying a suitable flag.

They stopped the yacht just outside the harbour mouth, brought down the sails, and donned their pirate gear including eye patches.

Captain George put the engine into gear to motor in slowly for a photograph . . . and the engine stopped. Immeditely the crew had to man the sails, which was impossible wearing eyepatches (how did those pirates do it?) so unfortunately the photographs we have are not of them looking as fearsome as we would like.

However we did get some nice shots of Papazas under sail, as she made her way in to raft up against anohter yacht in the marina.

The sea had been very choppy that day and dirt in the bottom of the fuel tank had been churned up by the motion. All was fixed that evening and the crew were able to have an additional day’s sailing taking her back to Faliro Marina, her normal base. 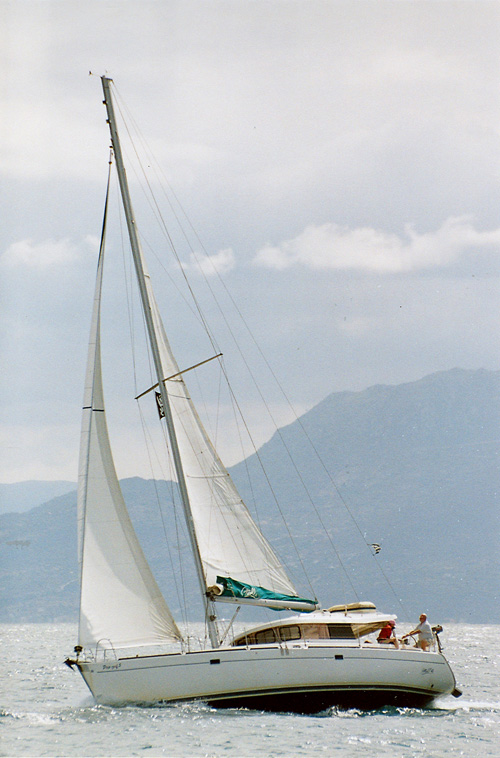 Excellent course. I left feeling empowered and confident for the future.

The experience has made me want to take up the sport. I had a fantastic week. Thank you George and Aegean Sailing School for making this a memorable experience.