The past ten days have seen Greece at its winter best with daytime temperatures in the 20s and warm, balmy weather.

Here’s a photograph sent to me by Simon Grace, who lives in Athens. Simon obtained his RYA Day Skipper certificate with us earlier this year and now sails his own small boat with his family.

The photograph shows Simon with an octopus he caught yesterday using a rod and line. Luckily for the octopus, he was rather small and so was returned to the sea. Just look at the weather – wonderful for mid November.

Unfortunately, Greece is suffering the effects of climate change like most places in the world. The crew who booked onto our autumn milebuilder during the last week of October were unlucky with weather. Torrential rain and strong winds plagued them during their trip, leading to a change of route and some wet, if exciting sailing.

Compare Simon’s picture above with this which was sent to me by Rainer Alles, one of the crew on the milebuilder. It shows instructor, Mark Cooper, on the helm while they tackled the waves on the Eastern Peloponnese. Not a swimsuit in sight! 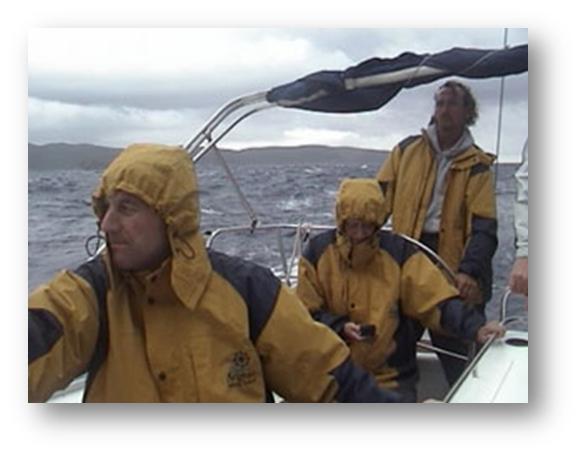 I hate it when we get bad weather as I know that most people come to Greece to escape the rain and cold. Although I cannot do anything about it I can’t help but feel responsible somehow.

Due to the adverse conditions they did not sail to the Cyclades as planned. This proved to be a good decision as the Cyclades were hammered by Force 9 – 10 winds most of the week and the yacht could have been stormbound and unable to sail on.

Instead the cruise took place in the Argolic Gulf and included the picturesque ancient town of Monemvasia on the south of the Peloponnese, and the attractive city of Navplion in the north.

The yacht was hit by a particularly bad gust just off Monemvasia as the crew were putting away the sails in preparation for entering the marina. Mark reported that the wind came up to over 40 knots while at the same time visibility was reduced to a few metres.

He turned the yacht back out to sea and ran before the wind until visibility improved enough for them to make another approach.

The crew had an uncomfortable night in Monemvasia as the storm continued to rage, and had to get up during the night as a shoreline parted, but they were quite safe. The gale caused chaos in the harbour, sinking two boats. Here is another photograph from Rainer showing the salvage operation the next day. 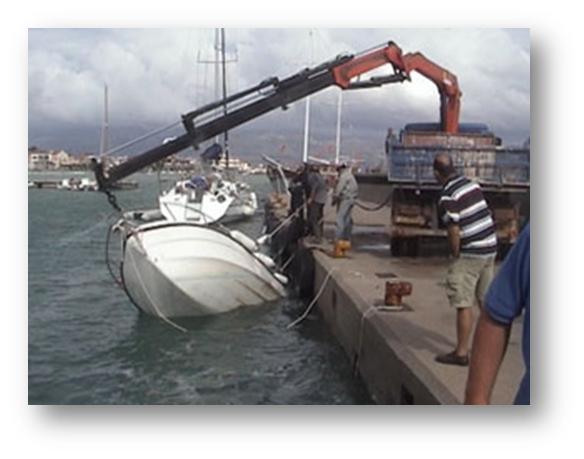 Although there was some improvement to the weather later in the week, overall it was a tiring, taxing experience. However we’re sure that it taught valuable lessons to all those involved and they went home with some amazing memories and stories.

We run the mile building trips in the spring and autumn as the weather conditions are often more challenging, which is good for experience building. We’ve never had anything quite like this milebuilder before

If any of the crew wants to add a comment or send me a photograph I can include it here.

Excellent course. Jake was very patient! Thank you for thinking of everything for us so we could just enjoy ourselves.

A really serious and truly instructive week. The crew on board were encouraged to their respective strengths and in this spirit I would recommend this course to anyone seriously interested in skippering and developing sailing skills.

Instructor was very knowledgeable and good at showing what he means. He is very good at ensuring the students know what is expected. The sailing route was good so in addition to learning it was nice to see the harbours. Mix of people on board was great and good to learn with. Great overall.